Coin grading is the process of having your coins evaluated by a professional third-party company, accredited, and placed in a protective holder (slabbed).

The arguments for and against this process will rage on and one’s reasons for doing so are one’s own. Coins can be graded for a multitude of reasons including verification of the coin, attribution of varieties, confirming authenticity, protecting the coin for the future or from damage, for insurance purposes and many more. Coin grading can also become very expensive, so it is important to consider carefully the reasons for doing so.

LCGS were specialists in British coins. Not only did they use the major reference texts such as Peck, Freeman, ESC, Marsh and more, but they actively engaged in attributing new varieties of coins. We were massive advocates of this as without noting these new varieties we do not believe coin collecting develops and progresses for future generations and without this service varieties continued to go unrecorded and lost to history.

The methods used by LCGS were designed to ensure that the most common mistake is avoided when buying a coin: that it is not over-graded and consequently over-priced. They also emphasise that they guarantee that the coins encapsulated are genuine. In the unlikely event that it is later proved to be a forgery, they will pay the submitter its full market value.

The encapsulation also ensures that the coin cannot be damaged by mishandling. Its unique LCGS identity number and images stored in their archive are excellent security measures and can be used as evidence in the event of an insurance claim.

LCGS use a 100-point grading system to grade their coins, ranging from 1 (Low) to (100) high, and we feel this grading method is best suited to UK coins. We do however note that the wider worldwide market does not recognise LGCS in the same commercial standing as NGC or PCGS so is excellent for the UK market but not necessarily suited to international sales, and as a smaller company turnaround times can be lengthy.

Both companies are based in the USA and use a scale of grading called the Sheldon Scale which was developed as a way of rating Large US Cents. Whilst it has gone through many iterations to include divisions within grades, we believe it is fundamentally flawed when it comes to British coins due to their practice of not acknowledging any variation not already in existing numismatic texts (Peck, ESC. etc). We have discovered and had confirmed over 40 new variations which unfortunately if slabbed by NGC or PCGS would have been lost to history.

It can also be misleading for those unaware of the grading process which is generally less technical than traditional UK grading criteria. A prime example of this is that a coin graded as “About Uncirculated” in the US can equate to as low as Very Fine in the UK. A conversion chart is included below for reference.

Whilst we have our opinions on the technical processes it is undeniable though that both grading houses rank at the very top of the commercial tree of graders. Both are universally recognised as the key players in the market with over 85 million coins graded between them. Most of the US market now considers grading a necessity in many circles.

We can assist in grading to NGC, please get in touch for more information. 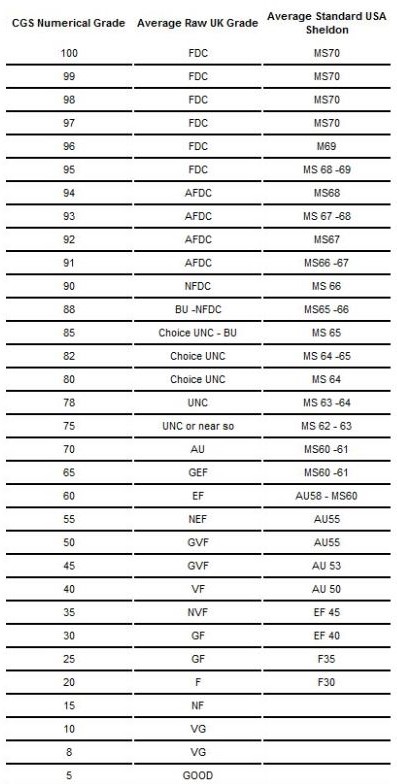 From single coins to full collections and precious metals, find out how we can help realise maximum value.

An extensive range of certified and high quality coins to help grow your collection.

A personalised service from wants lists to anonymous auction bidding, it's all about you.

Inherited a collection, going through probate or just looking for professional assistance? We can help.

From novice to expert, grading is available to all. We'll gladly guide you through the process.

From simple safes to bespoke security solutions we can help guide you through the options.